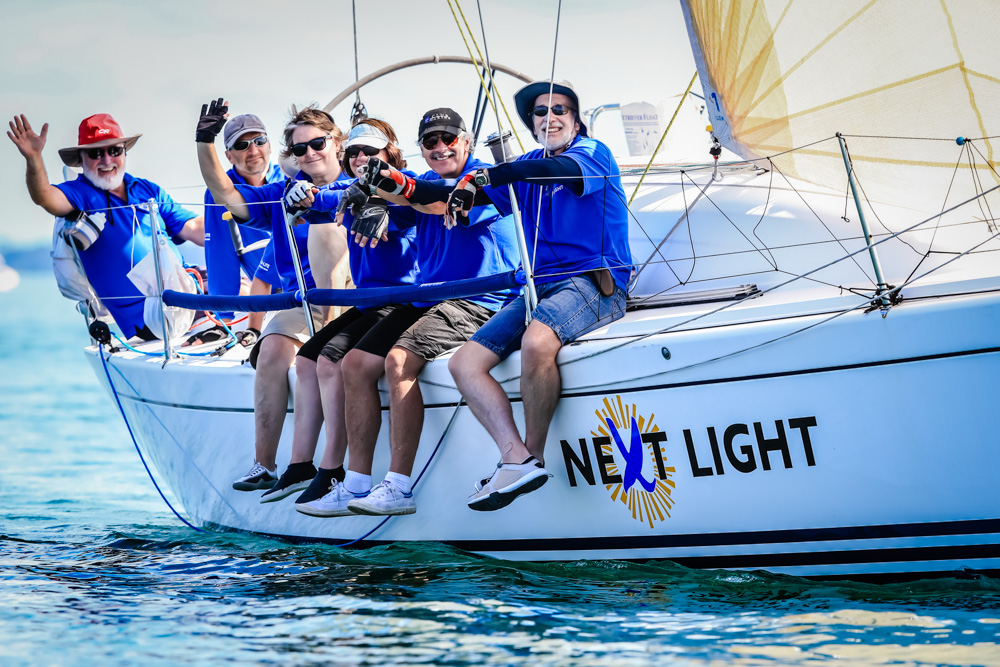 12 APRIL 2015   MEDIA RELEASE
Event: Sail Port Stephens, April 13-19, 2015 conducted by the Corlette Point Sailing Association and raced on Nelson Bay and around the outer islands of Port Stephens on the NSW north coast

The annual Sail Port Stephens regatta starts tomorrow, Monday April 13, 2015 for the strongest racing fleet in three years. When the gun fires for the Commodore’s Cup three islands race in the morning, sending 40 of the more than 100 entries signed up for the week-long sailing regatta off the start line, it signals the fun and competition are underway.

Principal Race Officer Denis Thompson says the majority of Commodore’s Cup races will be run on Nelson Bay. “Mostly we’ll be inshore; I’d like to do at least one day out around the islands… maybe on the Wednesday. It will depend on the weather and swell across the bar.”

Thompson expects day one to bring southerly winds 12-15kts and a rising swell. Tuesday looks light with an easterly pattern and Wednesday things are set to freshen to a very pleasant 12-15 knot nor’easter wind.

John Egger, owner/skipper of first time Sail Port Stephens entry Eggsilante, a Jeanneau 31, is a big fan of the islands race, “there’s nothing like it unless you head to Hamilton Island.” Egger’s boat has one of those catchy names synonymous with the cruising fleet. His mate has a boat called Ipsilante so Egger thought he’d play around with the moniker incorporating his surname.

“It will be my first time at Port Stephens as an owner; we’d have to be one of if not the smallest in the fleet at 31 feet. Expectations…..well we are taking part and we’ll be in there trying. The smaller boats struggle on the longer legs and if it’s really light we may not finish a couple of races due to the time limit. The plan is to have a lot of fun,” Egger promises.

Eggsilante’s crew is able to enjoy both halves of Sail Port Stephens starting with the Commodore’s Cup Cruising schedule Monday to Wednesday April 15 (division lists are available here) followed by a layday and then into the second half, the Performance Cruising program Friday 17 – Sunday 19, one of the Port Stephens Trophy events.

Coming in for the NSW IRC Championship starting on the Friday is Shane Kearns’ S&S34 Quikpoint Azzurro, hoping to be the “surprise packet of IRC division 2”, if the 21 starters end up split across two divisions.

The fiberglass 1981 built yacht that was originally Shenandoah II went the way of a lot of boats when they are put out to pasture as Kearns explained in the lead up to last year’s Rolex Sydney Hobart, “she wasn’t seaworthy. There was not one inch that didn’t need work. The day I had her surveyed it was raining. We were downstairs and we had on our wet weather gear inside. You could see daylight where the mast came through the deck.”

Kearns negotiated to buy the boat in Queensland for $23,000; loose change compared to the near $300k he’s spent travelling back and forth from Sydney to the Mooloolaba shipyard overseeing the meticulous restoration, and kitting it out with racing sails.

“Port Stephens is our first regatta and I’ll have some of the same scurvy crew who used to sail on Impeccable…. Felicity Nelson and Jim Nixon… I took to Hobart. We expect to finish last over the line but we should beat a lot of better boats on handicap. Windward/leeward short course racing will be a new experience; the boat is really set up for offshore.”

Onshore Port Stephens will be filled with sailors and holidaymakers soaking up the festival atmosphere over the second week of NSW school holidays. d’Albora Marina has organised live music at Nelson Bay from 11-2pm on Tuesday 14 and 12 – 3pm on Thursday 16, Saturday 18 and the regatta’s closing day, Sunday April 19. A reptile show for kids will be staged at the marina 1-2pm on Wednesday April 15.

Budding under 18 sailors take their turn at some competition time on Wednesday and Thursday thanks to a new Junior One Sail series. Numbers are building strongly for the inaugural two-day youth regatta, supported by local business Port Stephens Strata.

Pantaenius’ major sponsorship continues for the second year and Sail Port Stephens is proudly supported by the NSW Government through its tourism and major events agency, Destination NSW.